Join Our Newsletter and Read the Latest Posts First

Sign up and receive exclusive access to fitness and health tips, delicious recipes, workouts, and all things wellness. 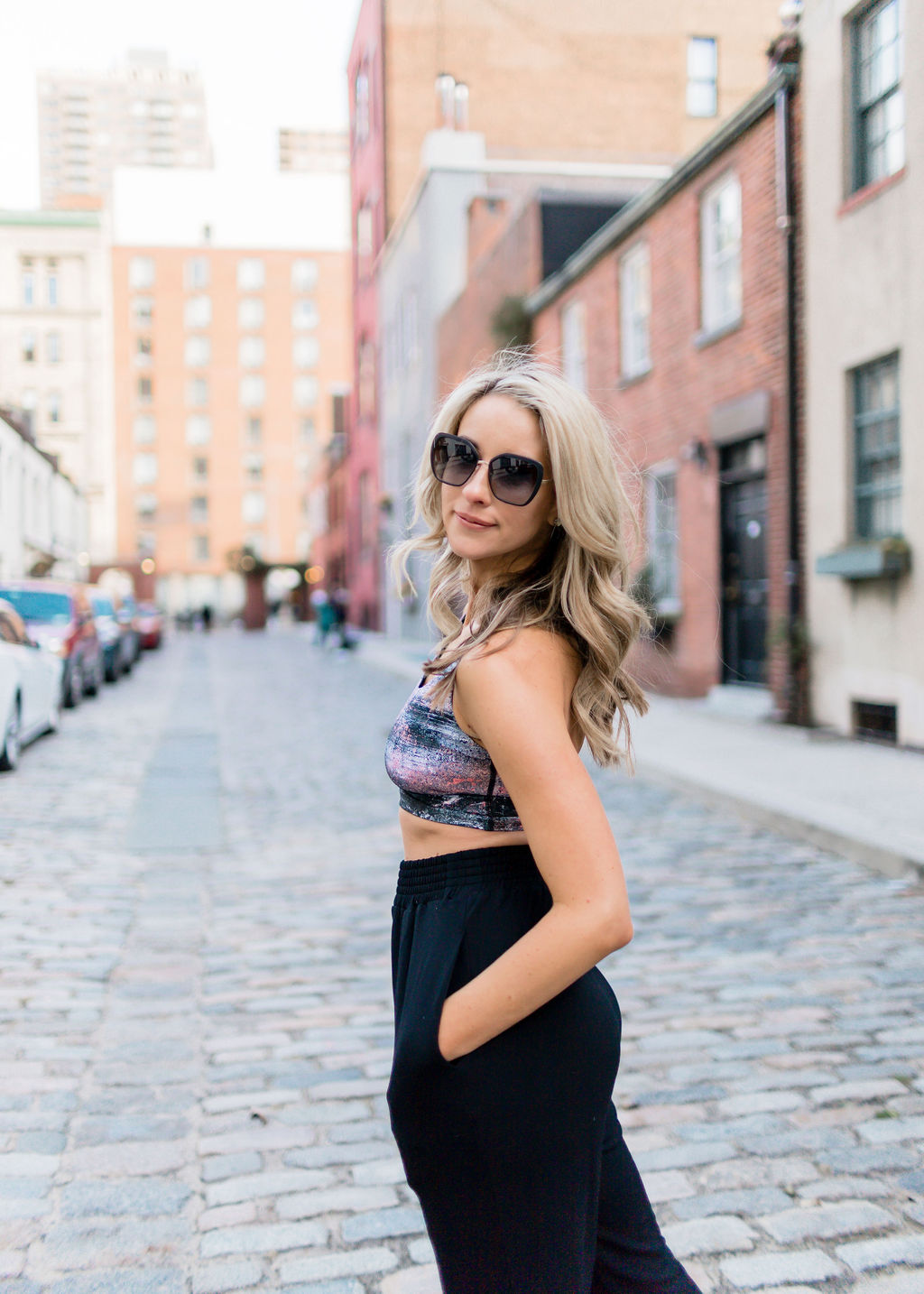 This is some text inside of a div block.

This is some text inside of a div block.
min read

Last week was my birthday. I've realized in recent years I have a slightly complicated relationship with the day.

Growing up my parents were great about throwing me a fun party every year. They also made sure to wish me a happy birth month every October 1st. And I in turn have since passed on that expectation to Brad - who to his credit - does a really good job of creating a birth month experience with fun events to look forward to. (To be fair I think when your birthday falls in the middle or end of the month it's easier to stretch it out!)

I've finally been able to pinpoint that the reason I struggle with my birthday is because it can feel like a lot of pressure. Self afflicted, albeit.

But this year I gave myself a pep talk about letting go of any expectations - of myself or others. This turned out be surprisingly easy (more on that below.)

Anyway, on my birthday I woke up, did the usual family morning routine - got Sydney out of her crib, cuddled for a few minutes, changed a diaper while singing the ABCs, packed Sloane's preschool lunch, and kissed everyone bye.

I'd taken off of work for the day, and had decided I would do exactly what I felt like doing.

I made myself breakfast - an ezekial english muffin with 1/2 avocado, 1/2 kitehill cream cheese topped with smoked salmon + a big iced coffee to get specific . Then I worked out at home, showered, had lunch at honeybrains while reading a book (Fleischman Is In Trouble) instead of responding to emails like I usually would.

I stopped in a few boutiques, grabbed another coffee, walked through Central Park while talking on the phone with a few friends, and then back home to change for a date night.

To set the scene you should know that while changing I helped myself to a Magnolia Bakery cupcake. I think it was the first I've had, and it lived up to the hype. (I believe on your birthday dessert before dinner is completely appropriate).

Brad and I went out for a dinner of yellowtail hamachi, pasta, and wine. And then headed to a concert. Other than a subway delay, and almost falling asleep on the train home - Ross from Friends style - it was a completely lovely day.

I went to bed happy.

And over the next week or so I've thought about the past year, and what I've learned. I don't know if it's just me but turning a year older makes me extra introspective. So here's a few of my takeaways...

1. You can only control yourself. Period.

This sentiment has rattled around in my head for years- but that doesn't mean it's always easy to keep it top of mind. This year I feel like I (finally) made major improvements in this area.

The truth is we are pretty much powerless over what other people do, and say. So worrying about their actions, reactions, opinions etc. It's a waste of time, and energy.

Once I decided I would no longer let any of this weigh too heavily on me I honestly felt lighter.

I'm definitely a people pleaser by nature so it's my disposition to want others to feel happy - especially those close to me. I also realized I'm naturally SUPER affected by others energy.  I think you are either like this - or you just aren't (and if you aren't I'm a little jealous!)

In the past I'd be around people and absorb their moods - especially when they were negative. This lead to feeling out of control, disappointed or irritated. Anyone been there?

Reminding myself that I'm in charge of MY emotions and actions and no one else's has been incredibly HELPFUL.

It also helps me to take accountability for my own actions. And in turn I'm much less reactive, and feel like I'm in control of my life.

2. Embrace Change - it's not as scary as it seems.

This March we moved back to NYC after spending almost 6 years in Cleveland, Ohio. When we left New York we were newlyweds with a lot less familial responsibility, and no real clue if - or when we'd return as residents.

This time around we were moving back to uncharted territory - city life with a baby and a toddler.

We were comfortable, and happy living in Cleveland. (It's a city that gets a bad rap but is actually a wonderful place to live).

As much as I wanted to make this move it was HARD. We were saying goodbye to a lot of good. I was leaving great clients, a house/neighborhood we loved, and amazing friends. I feel fortunate that I got to know these friends pre-kids when life was a little simpler. (or at a minimum it was easier to make plans.) I also still feel grateful that I became pregnant around the same period of time as many of these friends, and we were able to navigate being new Moms together. (which is another post in itself.)

What I realized looking back is that the initial build up was actually tougher than the move itself. I think this is often the case for any big change -- you spend so much metal energy worrying and analyzing the new thing. Then it happens, and it's like ripping off a band aid.

Brad and I lived apart for the first three months of the year so that he could start his new job, and I could finish up work projects and sell our house. We also had a tiny family member decide this was a perfect time for major sleep regression. So I felt like I was in a perpetual state of zombie mode. That combined with apartment hunting, selling a house,  and saying goodbye to the place we had come to call home made those months intense.

BUT we packed up our house, put more than half our belongings in storage or donated, and moved to an apartment 70 % smaller than our spacious home.

It was an adjustment for sure, but it felt right.

People continually asked why we didn't just move to a suburb outside the city, But despite some aspects being logistically tougher we felt drawn back to NYC.

We arrived, and I quickly remembered why New York is my favorite city in the world. Life felt different and a little unpredictable. It also felt exciting, and refreshing.

I'm definitely not telling you guys to seek out a move to a state 6 hours away. What I'm saying is there's SO many areas for all of us that we can shake things up - whether it's putting yourself up for a promotion, going to a new workout class you feel intimidated by, taking the leap with a new relationship, or ending a destructive one - change can be GOOD.

My reasons for prioritizing fitness have changed somewhat over the years. But what I know for sure is exercise is therapeutic.

And don't let anyone tell you differently. There's science to back it up.

Maybe you're like me and you get irritable if you don't move enough. Or maybe not - and in that case I'm intrigued. Either way endorphins are real. They act as an opiate receptor in our brain, and in turn reduce pain and increase pleasure.

This doesn't mean you need to do a crazy, long strenuous workout, You just need to move. Next time you're in a terrible mood, or going through something try to fit in exercise. Clearly a workout isn't go to fix anyone's real life problems, but I challenge you not to feel better after.

This holds true for most things in life. Anytime I've put a REAL effort in to make something work, or reach a goal - I have gotten there.

Think about it. If you want to achieve something you have to do the work.

Want to get in better shape? You need to show up in the gym. Want to have a better relationship with your partner? You can't spend all your time together staring at your iPhones. Want to keep in touch with old friends? Send them a note, and make time to talk.

It's been many years since I made a career change, but I can tell I still have some people in my life who are confused by my career, and why I moved away from Publishing. Maybe you guys can relate?

I spend a good amount of my time with my personal training clients , and that's generally straight forward. But yikes explaining you are also a Wellness Blogger and Writer to anyone over age 50 can get confusing!

I'm thankful every single day that I get to do what I love in the Health & Wellness space. It's not an industry that's as easily understood as say Finance or Accounting (that's not a knock.) Wellness - especially now - is ever evolving. and my career path is certainly not linear.

Friends have shared feeling this way about a relationship they're in that their family can't understand. Or even a lifestyle change like Veganism, for example

The point is - whatever it is you are doing - do YOU. This is your life. With any luck we get the privilege of growing older every year, and considering the fact that I feel like my 21st birthday was basically yesterday I'd say there's no time like the present.

Do you guys like your birthday? Do you get reflective? Tell, tell in the comment section below.

5 Affordable Ways to Practice Self Care and Wellness

Healthy Dairy Free Hot Cocoa You Have to Try

Join Our Newsletter and
Read the Latest Posts First

The 5 Best Snacks to Eat When You're Stressed

Life is hard. Taking care of yourself doesn't have to be.

The 5 Best Snacks to Eat When You're Stressed